I want to learn about

Since you’re reading this, you’ve probably realized Tinder isn’t exactly overflowing with matches who are as ambitious, intelligent, and career-minded as you are. And if that’s what you’re looking for in an ideal partner, you’re probably wondering if The League is the app for you.

This League dating app review is packed with all the details you need to determine if this exclusive app is worth the wait, or just a waste of your time.

Not in your city yet? Consider Luxy instead.

According to its founder Amanda Bradford, The League was designed specifically for successful people who value traits like ambition and intelligence above everything else.

Or as one of The League’s ads puts it, people seeking drive, not double D’s.

Most of the app’s users are in consulting, finance, or tech, with some other fields like the fashion industry growing in number. The key to entry is being successful at what you do – The League is all about making power couples.

Other factors taken into consideration include your education and background. Reviewers will scrutinize your LinkedIn profile, which is also where the app will ultimately pull info for your profile from. If you pass the manual screening process, you’re in.

According to Bradford, The League acceptance rate hovers around 20-30% depending on the city.

Want to know how to get off The League wait list? Bradford revealed a few tips in an interview:

You can really tell, honestly, by what kind of effort people put into the application. We actually can see how long people spend on it… There’s a lot of signals in the data that tells you if someone’s really looking for a relationship and really wants to be there.

How Much Does The League Cost?

The League dating app is free to download and use. As a “Guest”, you’ll get up to 3 potential matches every day at 5:00 pm (aka “Happy Hour”).

There are three options for upgrading on The League:

Joining The League as a Member costs $29/month (paid annually), and these are the benefits:

Being a League Owner costs $83/month (paid annually), and includes these premium benefits:

Joining The League as an Investor costs $999/month, which is paid monthly rather than in a lump sum annually like the other premium levels.

These features are included with your Investor membership:

According to the app, subscribing members are seen by 40% more people, and have 40% more matches than free users in their same demographic.

If you want to take advantage of premium features without a paid subscription, you can purchase League Tickets to use them on an ala carte basis:

League Tickets are purchased in bundles:

How To Join The League

To get started, you’ll need to login to the app via Facebook and LinkedIn. Both are required to use this dating app.

But don’t worry, you won’t stumble across any coworkers in your match queue. The app automatically screens out anyone who currently works for the same company that you do.

Much of your personal information is auto-populated via LinkedIn, including your education and occupation.

You’ll still need to enter some basic personal information, choose your 6 photos, and complete a short “About Me” section.

The League pulls your photos from Facebook, and allows you to arrange them in the order you prefer. Keep in mind your primary photo will be automatically shown in black and white, so selecting an image with high contrast will probably look best:

In fact, the image above comes from a group of neuroscientists who decided to definitively answer the question, “What makes the perfect Tinder photo?” Their findings will serve you well on The League, and on any other dating sites and apps you use as well.

In addition to choosing an image with high contrast, you’ll also want to use a primary photo where:

For even more expert photo advice, check out this article.

At 140 characters or less, The League “About Me” bio is even shorter than a Tinder one. But don’t be tempted to skip it – The League’s reviewers want to know you’re serious about finding someone, so putting in the effort is practically mandatory.

The app’s core value centers around exclusive dating – matching people who are successful, ambitious, intelligent and seeking the same, so make sure your bio hits those notes.

League users also have the option of including a 10-second video profile. Doing this can give you an edge over your competition because users who include a video profile get prioritized by the matching algorithm. Of course, it's only an advantage if you knock it out of the park.

Once you’ve completed your profile, you’ll be placed on The League’s wait list for your city.

Wondering how to get off the League waitlist? Purchasing a full membership will guarantee you an expedited review – within 48 hours (Monday through Friday).

You can also get an expedited review on The League by doing things like referring a friend to sign up or tweaking your profile, but that same 48 hour timeline doesn't apply.

Profiles that have an “About Me” filled out and 6 photos will be reviewed before profiles that don’t.

The League app rejection process is pretty simple, you’ll get a notification that your profile didn’t make the cut.

When you are accepted, you’ll receive 3-15 matches, called “prospects”, every day at 5 pm. The number of matches depends on your membership level.

When you like one of your daily “5 at 5” matches and they’ve already liked your profile, you’ll get a “Home Run” notification. 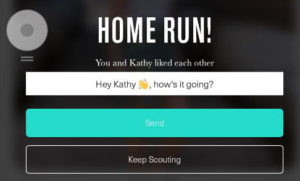 According to the app, the person who gets the Home Run notification should send the first message. But that’s only a suggestion – not a rule.

You can swipe left or right, and if the interest is mutual the messaging platform opens. The League also has a video chat feature.

Either half of a match can start messaging first on The League, but if it doesn’t happen within 21 days the match will expire.

Matches will also expire if the conversation stalls for longer than 14 days. It is possible to rematch with expired matches on The League at a later date.

If you are no longer interested in someone, you can unmatch people on The League by clicking the X in the top right corner and selecting “Expire.”

You’ll be asked to provide the reason:

Be selective about doing this, though – as it can make your League Score go from “Not Flaky” to “Semi-Flaky” or “Flaky” if you do it too often. That can really torpedo your match rate, especially with people looking for a long-term relationship. (Other factors that affect your League Score include how complete your profile is, how active you are on the app, and if you’ve been reported by other users.)

The League strictly adheres to the criteria you set for your ideal partner, so if your preferences are uber specific, you may get few (or no) matches. 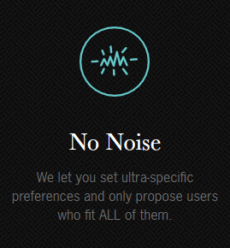 If you’re not getting many matches, you can spend 5 League Tickets to “Boost” your profile, which will show it to an additional 50 people that fit your preferences. Otherwise, your profile is shown to only 3-5 other users.

How The League’s Algorithm Works

While the exact workings are a closely held secret, The League isn’t shy about letting members know what behaviors will boost (or hurt) your rating:

League Live is a feature that allows singles to participate in 2-minute video dates. It happens twice a week, on Sundays and Wednesdays at 9 pm in select cities.

If you opt-in and are selected, each Sunday and Wednesday evening at 9 you can have a 2-minute conversation with 3 different potential matches, chosen by the app based on your preferences and location.

At the start of each video date, you’ll both be shown an icebreaker to get the conversation started. You can tap the “heart” to “like” the person at any time during your date, or afterward.

If there’s mutual opt-in, you’ll match and the messaging platform opens up.

The feature is available to both paid and free users, although League Members will get preference during the matching process. League Live is free, for now. But a low League Score will keep you from being able to access it.

According to Bradford, video dates are a way to help guarantee authenticity as well as a way to get to know a potential match before investing time on a first date.

2020 is the year of authenticity, which is why we built League Live, the only functionality in any dating app that emulates meeting randomly in real life, but within a protected environment with verified users.

The League members are some of the highest quality singles you’ll find on any dating app, so if you’re willing to jump through the hoops it’s likely worth it.

The League is jam-packed with the kind of high-quality matches you’re looking to meet, but keep in mind your competition is just as successful and ambitious as you are. If they weren’t, they wouldn’t have gotten past those metaphorical velvet ropes, right?

You’re up against the best of the best, so that means you need to bring your A-game at every level, from your profile to your photos to your messages. And remember, you get penalized for not checking the app on the daily… so better set that reminder now.

Wishing there was a way to meet the most attractive, intriguing women The League has to offer without devoting a ton of time you don’t have to the app?

Enter VIDA. Our team of online dating experts will handle everything for you, from writing a profile that sets you apart from your toughest competition to choosing your most attractive photo lineup using our data-driven, proven process.

We’ll even check the app for you every day, and handle all the back and forth messaging with the matches you want to meet most!

We Do Your Dating For You

Find Out If You Qualify!